"Seriously, is there anything you can't do?"
―Saki (Talent)

A very physical girl with a mysterious past who earns some money as a boxer in the minor circuits. She has no notions of what personal space is. Rumors have it she might not be completely human.

I first created Gaia back in the fall of 1994, which makes her ancient compared to the others. She was designed as a character for a Sci-Fi RPG inspired by the 80s/90s anime and manga I was into back then. She managed to stick around in spite of her dorky origins.

Gaia has a haircut

And it grew back somehow

Variation on the training outfit but it's colder 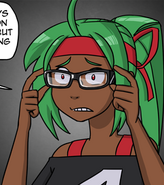 Gaia has glasses of her own now

Gaia but in Marie-Neige's dreams

With a jacket on

Gaia's earth shirt
Add a photo to this gallery

Retrieved from "https://frivolesque.fandom.com/wiki/Gaia_Maguire?oldid=463"
Community content is available under CC-BY-SA unless otherwise noted.