"Well, you know, how in pop culture, the glasses girl needs to remove her glasses and let her hair down to make the guys realize she was beautiful all along and the audience is supposed to agree with that? That's, like, the total opposite of what I stand for."
―Marie-Neige (Rival)

An enthusiastic, easygoing and positive university student, Marie-Neige is Chloé's best friend. She's considered beautiful by most people until her insane geekiness turns them away.

Once known as Yuki, I created Marie-Neige along with Chloé in 2003. An important character at first, I ended up phasing her out as I focused more and more on her girlfriend. Originally envisioned as a pure, gentle girl, I thought making her the opposite would make her much more interesting. 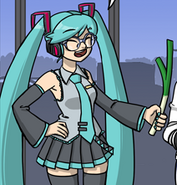 Marie-Neige cosplays as Miku
Add a photo to this gallery

Retrieved from "https://frivolesque.fandom.com/wiki/Marie-Neige_Saint-Vallier?oldid=464"
Community content is available under CC-BY-SA unless otherwise noted.