The Agency, The Network

Trained as an assassin from a young age, and currently doing mercenary work. With her everyday life being the stuff of movies and comic books, she finds it difficult to mingle with others and tends to prefer being alone.

Saki was first created as a cute fighting schoolgirl inspired by all the anime and fighting games I was into back in 1998. My first character of the digital age, she unexplainably became more and more badass with time until she bore next to no similarities with her original self. 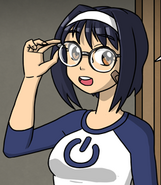 Retrieved from "https://frivolesque.fandom.com/wiki/Saki_Laurier?oldid=465"
Community content is available under CC-BY-SA unless otherwise noted.